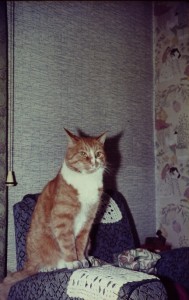 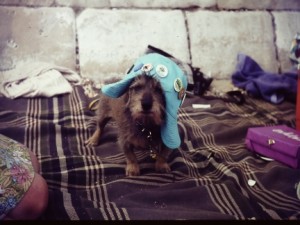 Ever since I was a young child, my life has been touched by animals. My first cat at the age of 5 was Candy followed by dear Dachsund Dougal (photos above) – who was so docile I used to love to dress him up in our clothes – you can see their photos above. In my adult life, my life has been graced by a family of cats gifted to us by Bambi the tortoiseshell, Marvin Gee who is featured below and we currently share our lives with two dear white felines called Ping and Pongo. 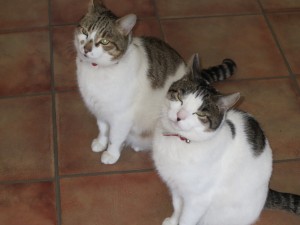 -Animals – e.g. from rescue shelters who have gone through much upheaval and trauma
-Pets who are ill or who are about to have or are recovering from surgery
-Pets on medication – to help relieve their bodies of the toxicity of the medication (i.e. after vaccinations and antibiotics)
-During stressful times in the home – illness, moving, bereavement, divorce, separation due to holidays
-To assist with terminally ill pets and/or those that live with serious health issues
-For grieving animals who have lost their carer or other members of their animal family

As an adult, I have had the privilege of being able to help all of my animal family with essences and they have taught me much about how to use essences with animals. One of my biggest teachers was Marvin Gee and you can read his story below. 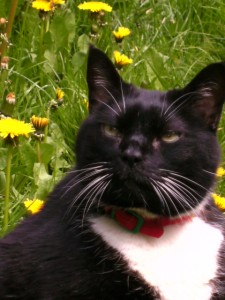 Over the years Marvin took many flower essences to help him cope with everyday life. We learned that Marvin had been taken away from his Mum very early on as a kitten and this had resulted in him being a very clingy cat… continued essences to help him with this helped enormously. He also had a pattern of cystitis – so he took many essences to help him manage this condition. He also took glyconutrients for the last 5 years of his life – a nutritional supplement to enhance the immune system.

In April 2008 – at age 18 – Marvin had to have a big operation to save his life as he had large stones stuck in his urethra. Normally cats of his age are not offered this kind of radical treatment due to the risks associated with anaesthesia; however Marvin’s blood work was showing a “younger” cat. Our vet was very impressed with his results and said “Well whatever you’re doing, keep doing it as it is working for him”. Marvin took his own bottle of flower essences to the vet’s with him and the vet and nurses very kindly agreed to put a couple of drops of essences in their palms and stroke him before and after each anaesthetic and also throughout the day during his week long stay in hospital. He had also had his flower essence put into his water. He was nicknamed “Buddha” by the vet as he was so relaxed and – in the vet’s words “He allowed us to do what was needed to help him”. To everyone’s amazement Marvin sailed through his 3 hour operation and recovered really quickly considering his age and the severity of his condition. He had one hiccup – the stress of the operation and the week away from home tipped him into high blood sugar readings. Tests showed that he was not diabetic before the operation.

Thanks to glyconutrients and flower essences Marvin never needed to have medication for this and we managed this at home with focused flower essences, lots of glyconutrients and TLC! And so the work began… Marvin began to inspire the creation of his own range of StrongHeart essences. After 20 long and mostly healthy years, Marvin passed away on 11th  November 2009. Flower essences accompanied him throughout his transition and he was prepared for the next part of his journey with his own Senior Pet combination, frequent stroking with Magnolia Essence and floral acupuncture treatments to help him stay peaceful and allow his transition to pass smoothly. Marvin leaves behind his own range of essences called MARVIN’S STRONGHEART ESSENCES… for ALL ANIMALS AND BIRDS, large or small, furred or feathered. Although Marvin is no longer with us, his courage and strong heart remain alive in the essences that carry his name.

You can also purchase Marvin’s Strongheart Essences via the MoonFlower Essence online shop by following the link below:

← Choice Points – Decisions that can change your life
2014 – A year of dreams coming true – thank you! →